You ever find yourself staring at a computer screen with no idea how to open a piece? Great, me neither. Blogs of the Round Table made its triumphant return in April on a new two month schedule: our theme was “The Right Touch”.

Joysticks. Keyboards and mice. Mashing a controller with your fist. Touching. Poking. Waggling. Wiggling. Moving your head around a virtual reality world. Directing an arc of urine. The ways in which we can interact with games have changed from simple electrical switches into much more complex and nuanced forms. We can even adapt and alter controls for people who have difficulty using traditional methods.

Some of these methods work, and some don’t. Most of us we be familiar with complaints about the Wii’s “waggle” controls, the thumb-numbing frustration of virtual buttons on a touchscreen device, or the gyroscopic motions that ruin the 3D bit of the Nintendo 3DS. How do we move forward with controls in games? Are the old ways the best, or a barrier to entry? Are you looking forward to playing Farmville on the Facebook-ulus Rift? 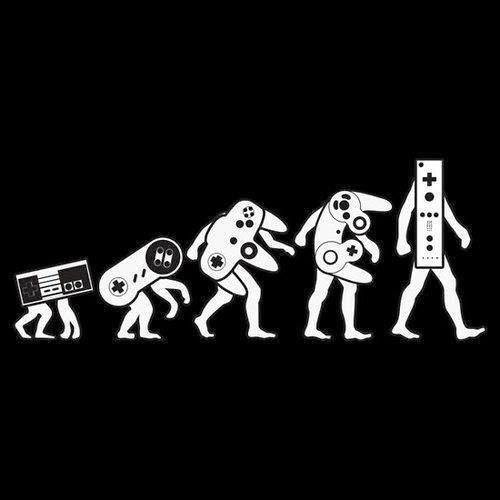 Amsel von Spreckelsen, whose blog Madness and Play focuses on mental health and gaming, writes about the possibilities of game controllers to link players on an emotional, psychological level with games and not just a mechanical one. We’ve already seen crude examples of this in the form of rumble – see Resident Evil making your controller vibrate with your avatar’s every heartbeat – and Amsel also mentions unusually elaborate, involved control mechanisms such as The Walking Dead’s grave digging sequence. Perhaps one future of control, then, could be utilising biometrics to alter the experience (Valve and Nintendo were said to be experimenting with this at some stage) so that aspects of our physiology, such as heart rate and galvanic skin response, could change everything from a jump scare to the speed or difficulty of the game.

Matt Leslie tries to get on my bad side by complaining about the Mega Drive’s controller in the first paragraph of his essay, before talking about ways in which developments in controls have actually hampered progress, such as adding more buttons at the expense of simplicity and incorporating motion at the expense of precision and, somewhat ironically, responsiveness. I’m not sure if I agree with the last point about virtual reality headsets being “overwhelming antisocial”: I agree with that point, I just don’t think it’s a problem. Videogames may be highly social, but the applications VR is targeting are not: they’re single-player focused, ‘immersive’ games, and the fact that you’re playing Elite: Dangerous on VR doesn’t preclude someone from watching on a screen. Is watching someone play a game really pro-social? I often find it can be the opposite. In the first of two pieces for this BoRT cycle, Peter Shafer talks about touch controls and second screen apps. He mentions a second screen appearance applied to something like the Battlestar Galactica board game, and while I love the game, I think it’s hard to beat the joy of tossing your Cylon card onto the board with a smug grin on your face. After having a few games of Scrabble using my iPhone as a tile rack and an iPad as the board, I’ve never been sold on second screens as a replacement for board games – tile racks may clatter, but they don’t crash – and Shafer’s discussion of the Google Chromecast makes me wonder if having two devices just increases the complexity of something that is better played with 1:1 touch controls on a portable games console, smartphone or tablet.

Jeremy Voss also focuses on touch controls and VR while simultaneously setting off the Citizen Kane klaxon that we keep on-board the Critical Distance orbital lair. He mentions the Steam controller as an interesting way to introduce ‘non-gamers’ to traditional controls through in a way that the PlayStation 4 and PSVita do not. Again, not sure I buy the anti-VR arguments (I’ve played with an Oculus Rift and enjoyed it, even though I was playing the terrible Strike Suit Zero):

It’s also going to be expensive, and silly-looking, and the whole nausea thing can’t be ignored.

Everything about videogames is expensive, most are silly-looking (unless you think strumming a plastic guitar is the height of style) and lots of people get motion sickness from regular, non-VR games. I think the biggest problem for VR is that there’s a disparity between motion and your avatar’s movement: if you’re playing a game like Half-Life 2 for example, you’d need to have free rotation to navigate the environment, and it would get exhausting. Compare this to something like Eve Valkyrie where you’re just adjusting your view in a cockpit, something that’s better-suited to VR. Ultimately, virtual reality is like motion control: games need to take advantage of its unique applications, and not just shoe-horn old paradigms into a new one.

Over at Game Intellectualism, they discuss the ‘anti-simulation’, intentionally bad controls of QWOP and Surgeon Simulator. Rather than anti-simulation in the sense of an ‘arcade’ game that doesn’t strive to obey the laws of physics, these are games which use controls to make rudimentary acts highly challenging: in QWOP, you control individual muscles rather than the runner they belong to as an individual. One game they don’t mention is Octodad, which explicitly makes the extreme difficulty into an act of comedy: a task like collecting milk off a shelf becomes Herculian (even though a real octopus is actually fairly dextrous.) In a second piece, Peter Shafer responds to this article writes about anti-simulations as another form of expression, like a different style of painting.

In an epic two-part blog, Nate Paolasso writes about the past and present (part one) and future (part two) of control. It’s the only article to really dissect the Wii U’s Gamepad controller, which I think says a lot for how it has been received. It seems like even Nintendo themselves don’t know what to do with it: it wasn’t the first controller with a built-in display (all hail the Dreamcast) but, like the Dreamcast, there’s a limited utility to what you can do with a second screen. Or is it rather a case of limited imagination? While Nate is “content with using a controller”, I’m not sure if the regression we’ve seen with the Xbox One and PlayStation 4 is the best way to get a wider audience of people into videogames – especially people with disabilities, who find traditional controllers difficult to use. Corey Milne writes about a favourite childhood experience of mine: firing lurid plastic light guns at the TV. Light gun games represent the antithesis of a modern controller, and also the modern shooter: most people can grasp how to point and fire in a game like Time Crisis while Call of Duty remains extremely complex.

And finally, Shaun of Arcadian Rhythms writes a more personal history of his experiences with controllers before concluding that the future of control will largely be one of consolidation rather than diversification: better touch screens with raised areas for different tasks, sophisticated voice controls and more refined motion controls. He makes a case for how the keyboard and mouse have stood the test of time – although given that they also mention their RSI, and as I sit having nursed my own aching wrist with Voltarol, maybe it wouldn’t be a bad thing to see the back of the old keyboard and mouse combination. Not that modern controllers are much better – the 3DSXL and PS3 controllers give me muscle cramps, too.

That’s us for another session – we’ll be back soon with another brain-stimulating instalment of Blogs of the Round Table. Thanks to all of our contributors!